/ love hard /
18 Comments
This is Part III of a three part birth story. (Click here for Part I and Part II) It’s taken me a long of time to come to terms with how our daughter, Holland, was brought into this world. Sadly, it was not the joyous occasion I desperately wanted. I know though, that we are incredibly blessed to both be healthy and safe and nothing I write is meant to dismiss that major blessing. Additionally, nothing is meant to discount the birth experience of other mothers. This is simply my account of Holland’s arrival.

After the epidural and pitocin, I was able to hit 7 cm and I felt well on my way to becoming a mother. I had already gone through three shifts of nurses and the fourth shift of nurses who arrived that morning assured me that I’d have a baby by the time their shift ended that evening at 7 p.m. In fact, they all predicted that I would have the baby WELL before then. So did I. Adam and I started talking about having the baby before noon. As the morning progressed, I kept changing positions in bed and doing what I could to move the process along. At the next check however, I learned that I had not made any further progress. I was very disappointed. They turned up the pitocin and assured me that things would get moving again. By noon, I had progressed to 8 cm but they were a bit worried because I no longer felt 100% effaced. I wondered what that could possibly mean and they explained that my cervix was likely swelling a bit. As a result, I started to run a fever and they had to put me on IV antibiotics.
As the afternoon progressed and I was continually checked, I was told that I was no longer dilating and that my cervix was continuing to swell. They decided the only thing they could do to help was to ice my cervix. Yup. ICE my cervix. Trust me, that process is about as fun as it sounds… in other words, it was incredibly awkward and strange. But, I tried to keep a positive attitude because I felt SO close to having this baby. By this time, I had been in labor for over 40 hours and had been bed ridden for 15 or so. As a result of being in the bed so much, my body was sore. I was in a LOT of pain, even with the epidural, and was once again feeling my contractions. As we waited for word of whether the “icing of my cervix” worked, I cried. I was so exhausted. I had been on a rollercoaster of emotions over the last two days and I was so ready to just meet our baby.
At the next check, it became apparent that I was still only 8 cm and my cervix was still swollen. My doctor came in and had a frank talk with me. She said she had never seen anyone with that much swelling deliver vaginally. She was willing to let me continue to labor for a few more hours, but by 7 p.m., my water would have been broken for 24 hours and she honestly believed that a c-section was going to be necessary. I cried. A lot. I called for my mom and she joined me in the labor and delivery suite and we cried together. Adam held me. Tia held me. My mom held me. It was so scary and I was more disappointed than I can convey. A c-section was my own “worst case scenario” and here it was… my only way out. After mourning the vaginal birth I wouldn’t get, I told me doctor they could proceed with the c-section. Sadly, she wouldn’t be able to perform the surgery herself and I got passed on to another doctor in her practice. The fourth shift of nurses I began the day with were also going to be out the door soon. It felt like everyone was leaving me behind. The doctor I got switched to was delivering another baby so I had to wait. Waiting made my nerves worst and I continued to cry. I waited…and waited. 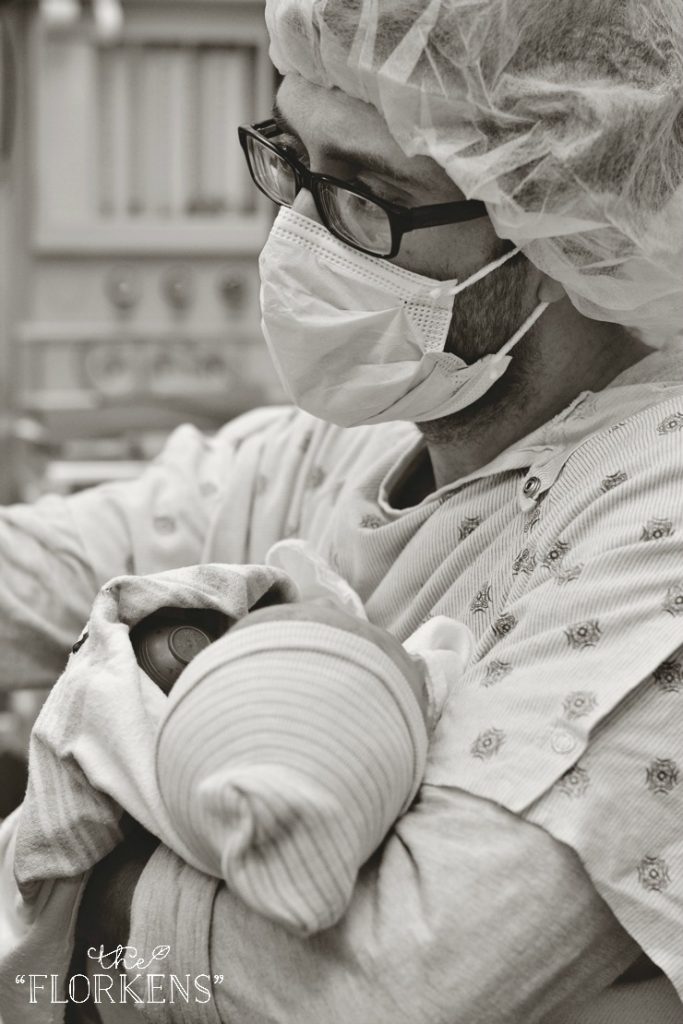 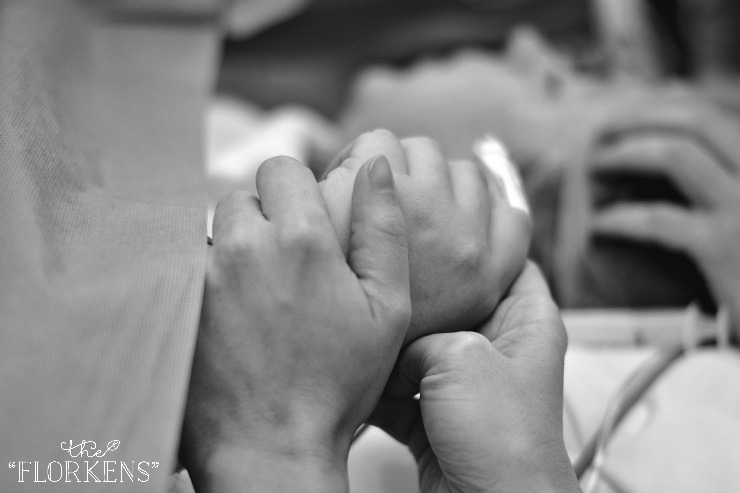 At last around 7:30 p.m., they wheeled me away to the O.R. and I cried harder than I think I have in my entire life. I was so scared and so angry at how the entire process had happened. When I got to the O.R., the anesthesiologist began administering medicine to numb me further. Before I knew it, my fingers on one hand were numb. I told him this and he said that was an “abnormal” reaction. Soon, numb fingers turned into a numb arm… and a numb arm turned into a paralyzed neck and a paralyzed neck turned into slurred speech and labored breathing. By the time they let Adam in the O.R., I was panicked. I couldn’t move my right arm, turn my head, and I was struggling to take every breath. I kept saying (or attempting to) “I can’t breathe” but the anesthesiologist would just respond, “Your O2 stats are fine.”
There must have been panic in my eyes because I could see Adam panicking for me as well. He tried telling the anesthesiologist that I was having trouble breathing but he would only mutter “Her O2 stats are fine.” They didn’t feel “fine”…. I honestly believed that the “abnormal” reaction I was having was going to kill me. Perhaps that’s why, when they pulled our child out of me and into the world at 7:51 p.m., (nearly 47 hours after my labor began) I did not feel immediate joy. They announced that she was a girl and that she had hair and dimples….but I was still terrified. I was happy she was safe of course but I was worried she’d grow up without a mother. I still couldn’t breathe normally. It felt like someone had a plastic bag over my head. My entire body began to shake uncontrollably. They tried to hand Holland to me to hold, but I couldn’t hold her because I couldn’t move my arm or head and I was shaking too hard. At last, they quit trying to balance her on my shaking body and they handed her to Adam. Adam held her with one arm and stroked my face with his other hand and assured me that things would be okay.
Adam was seated behind me and since I couldn’t turn my head, I couldn’t see him or her. So, as he held her, he told me what she looked like. He told me that she had my dimples and dark hair. He told me that she was beautiful and that everything would be okay. I continued to shake uncontrollably from the medicine and the anesthesiologist threatened to put me under entirely so that they could finish the surgery and sew me up. Our doula, Tia, heard his threat and rose from her allotted chair and threw her body over mine in an attempt to warm me up. Her body heat must have helped because the anesthesiologist didn’t follow through with his threat. They finished the surgery without further complications. As they moved me to the gurney to be taken back out of the E.R., my ability to breathe easily again slowly returned. I still couldn’t move my arm or my head so they had to help me “hold” Holland as they wheeled me back to my room. They laid her on my chest and for the first time since she was born, nearly an hour before, I got to look into my beautiful daughter’s eyes.
Back in our room, I slowly began to regain feeling and movement in my neck and arm. After about an hour, I had a full range of motion again and could properly hold Holland. It felt fantastic. We did some skin to skin and started breastfeeding. Family came into visit and my heart was full.
________________________________________
I did not get a medication free birth. I did not get to do immediate skin to skin with my child. I did not get delayed cord clamping. I did not get to cry happy tears and see her emerge into this world. In the weeks after Holland was born, I recalled her birth with a sense of fear and failure. Since that time, I’ve learned there were likely some problems with my placenta and her umbilical cord that caused her prolonged labor and eventual c-section. A vaginal birth would have likely ended with severe trauma to her, including a possibility of death or brain damage. Knowing these facts helps me accept what happened a little better and feel “proud” that my body protected her from that fate. But I must admit that I still struggle to say that I “gave birth” to her. I don’t feel like I did… I feel like she was ripped from me instead in a moment where I believed my life was in danger. I know that not all c-section mommies have that experience or feel that way but I do. I hope that with time, and further reflection of how traumatic a vaginal birth might have been for us both, I’ll feel differently. For now though, I take solace in knowing that without modern medicine, Holland and I would probably not be here. I still mourn for the birth I wanted, but I joyously celebrate the healthy, happy child I received.

My life as a yo-yo